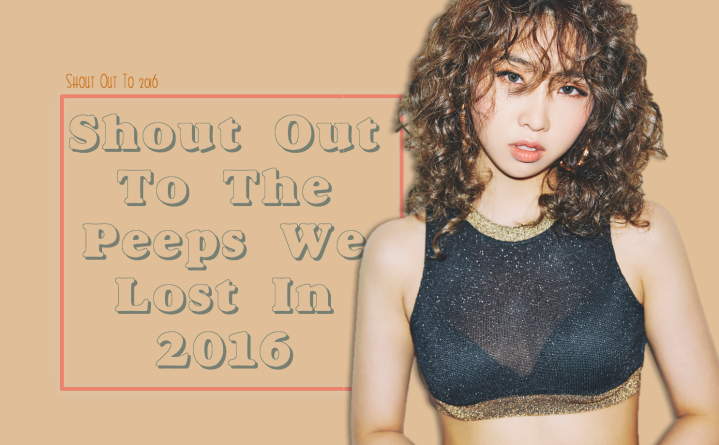 Kpop has seen a lot of huge groups lose members and/or disband in recent years, but 2016 has seen the largest exodus (see what I did there) with some of the biggest names in Kpop splitting up or going solo.

4minute called it quits this year after shifting the blame for their obvious impending split to fans who didn’t respond to their wack-tastic last release, “Hate.”

It was a weird and mysterious year regarding G.NA. She had been M.I.A for some time when suddenly she was wrapped up in a rumour of her being the mystery idol involved in a prostitution scandal. Then she left CUBE and we haven’t heard from or about her since.

After months of slowly slipping into obscurity as we ALL wait for CL to stop with her American endeavors and ‘Come Back Home’ to Kpop and 2ne1, Minzy chucked the deuces to the group AND YGE to pursue a solo career. We can’t say that we blame her because we’re all getting tired of the wait.

Following a rumour of his fraternizing with the common folk Junhyeok left Day6, and the rest of the group was put on a temporary ban from social media.

Kara kicked off 2016 by disbanding with most of the members leaving DSP, leaving Youngji by herself. The whole situation really sucks for Youngji who went through a lot to become a member just to be abandoned. The members do insist, however, that the group is not actually over and could reunite in the future. Suuuure.

In another instance of fading into obscurity as one member does their own thing, Jia said goodbye to Miss A and JYPE.

While they were doing well in Japan, the group never got off the ground in Korea and following their leader Jinon’s injury the group decided to end it.

Another group who just never got their big break, after 7 years, Rainbow called it quits this year with all of their contracts with DSP expiring. It’s been a rough year for DSP.

This came as no surprise to anyone. Everyone knew either Sunhwa or Hana that was going to leave this group after the cat was let out of the bag that there was some sort of beef between the two after they had a semi-public fight about comments Hana made on TV about Sunhwa’s drinking.

Members have been graduating from Nine Muses and in 2016 the group lost three members Euaerin, Minha, and Hyuna after each of their contracts with Star Empire expired, leaving the group at five members.

Despite all signs pointing to disbandment with the departure of Minzy and CL’s U.S promotions, blackjacks have been hoping that the group would defy the odds and return to the stage at least one last time, but late last month, after 7 years, YG dropped the news that 2ne1 was official over and done, with CL and Dara confirming they had all tried to do one more album and round of promotions before the split.

Vote for the group you will miss the most in the 2016 A247 Awards, and if we missed one of your favs share them with us in the comments below or on social media!