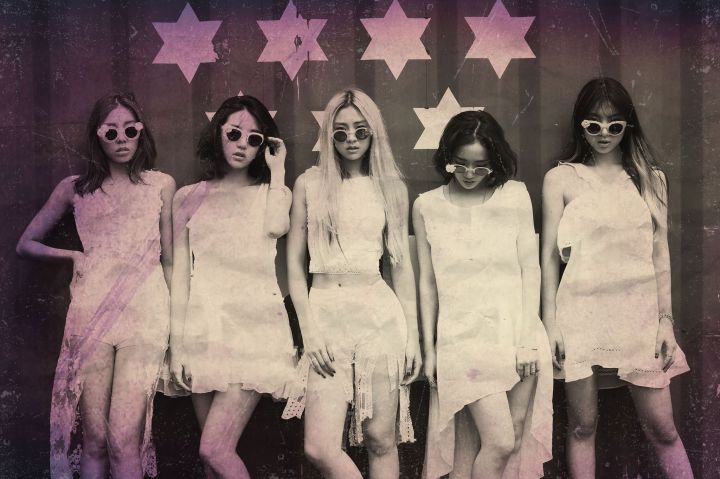 With “Kiss Kiss” the girls are doing some serious channeling of their 2013 release, “Pretty Pretty,” right down to the title, music AND music video. From their “Pretty Pretty” video, the girls borrow vibrant colors and stop motion video techniques. The song has very similar style as structure, but most basically they’ve brought back the repetitive title, and equally redundant chant-singing for the chorus. The only real difference is the key they sing in. I guess Super Chang Thai didn’t want it to be identical.

While it’s all in good quirky fun, it’s been done and thus it’s all a bit disappointing. Their go to producer Super Chang Thai really hasn’t given these girls much to branch out with, being that their catalog has remained pretty consistent, but that doesn’t mean “Kiss Kiss” is boring.

Despite the obvious resemblance of “Kiss Kiss” to their past hit, Ladies’ Code continue to deliver a unique brand of spunkiness. The melody and rhythm is simple and consistent, and it’s definitely catchy by the time it reaches the chorus. The choreography is cute and easy to follow as well. Although not as impressive as “Pretty Pretty,” it definitely surpasses previous February single, “So Wonderful” in distinctive department.

The group received negative  attention for “So Wonderful” as there were comparisons to the Wonder Girls’  2008 hit “Nobody”  because of the retro-pop concept. Now, they return back to the funky melody that sparked a potential chance to bring their career out of nugu-dom.

As a fan from their debut, Ladies’ Code have changed their style to appeal to the public. Their first mini album “Code 01” was a refreshing and impressive debut and it continued into the digital single “Hate You.” However, as they went down the typical route of public friendly pop songs, they seem to have lost their charm that made them stand out from other girl groups. Hopefully, “Kiss Kiss” will serve as a marker that will bring back the sound from their previous works in case a 2nd mini album is on its way. The song is really funny and catchy therefore it deserves attention. It contains all the ingredients for another hit!