Apparently a couple of Taeyeon antis were bored and decided to pick a fight between EXO fans and Girls’ Generation fans by starting the hashtag, #EXOLWantTaeyeonDead, and tweeting some seriously nasty stuff about the SNSD member. 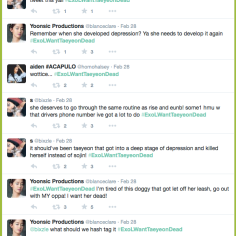 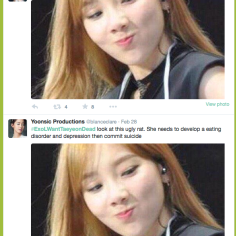 Normally I don’t give these things the time of day, but I think calling out the nonsense is necessary here. Not only is it just sh*tty to wish for someone to kill themselves, but to drag something as tragic as the Ladies’ Code accident into the psycho is just too much.