Korea, and Kpop have been drawing worldwide criticism for it’s racial and cultural insensitivity for years now. We’ve all seen and heard about what it’s like being a minority in Korea from people like Yoon Mirae, Insooni, Tiger JK, Michelle Lee, and Hangeng.

But, a couple weeks ago the news, and blogosphere has been buzzing with a week of story after story about plain ol’ ignorance:

No Jobs for Homosexuals

Nazarene University, a Korean Christian university, put out an ad this week in search of new teachers. Candidates have to be non smokers, non drinkers, and get this…straight. The school literally put in their ad ‘NO HOMOS’

To top it off, on the self health check list, applicants have to answer the following question:

“Have you had transsexual operation?”

No Jobs for Irish People Either

Also, this week an Irish girl shared with the world how she was declined a teaching job in Korea because of the “alcoholism nature of your kind.” No seriously:

Wendy of rookie group, Red Velvet, appeared with her group on radio show “Idol True Colors” (ironic ain’t it?) on which Wendy proceeded to share with listeners and the hosts her imitation of American Blacks and Whites. Aside from the fact that Wendy is ignorant…Miss A’s Jia and Fei and Super Junior M’s Zhou Mi were all rooting her on saying “That’s Right,” and being shocked at just how good she is at her imitations.

In his first solo music video for song “Tough Cookie,” Block B leader, Zico, angered a lot of people with the use of gay slur faggot:

His agency, Seven Seasons, came out later with a bogus excuse that basically sums up to, they didn’t know it was a bad word:

“The word was not intended to ridicule homosexuals, as it was only used for the purpose of his deep, musical narrative. If we would’ve known that the word would carry such derogatory meaning towards homosexuals, we would have strictly censored it.”

In addition, he’s received some criticism for his appropriation of “black/rap” culture, and even more for wearing a confederate flag in his MV. 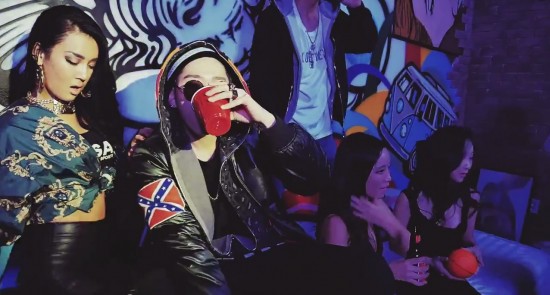 Needless to say, all of this is starting to get REALLY old. But, my question is, how long do you think international fans of Korean Culture and Kpop will tolerate this kind of thing before they completely turn their backs on the whole thing?