There are so many lists out there that poke fun at our favorite idols for their “less than perfect” use of English in their songs. And yes, I’ll be doing that here, but this isn’t just about Engrish, this is about the complete oversight of English speaking idols in Kpop. Just about every major agency has at least one native or fluent English speaker signed to them, and yet the genre continues to be plagued with completely jenky English lyrics.

In this edition of ‘You Oughta Know…Better’ we’re taking a look at some of the times SM Entertainment forgot to “spell check” with their human references.

Seriously SM? If you won’t let Henry in the group, at least let his English skills in!

Lyrics: Sexy, free and single and I’m ready too, Bingo <This is hands down the most frustrating English fail EVER! FOUR LETTERS made the difference between sense and complete ridiculousness!>

Lyrics: Go kick it in the butt, go kick it in the butt <I KID YOU NOT MY FRIENDS!! Somehow this one slipped under even my radar. I don’t know what I thought Eunhyuk was saying, but it definitely wasn’t this!! For using a completely misplaced and awkward sentence that’s barely even coherent, this one was a double fail!>

Better Line: ANYTHING ELSE!!

Lyrics: Close your lips, shut your tongue <I mean…it’s all just too unfortunate> 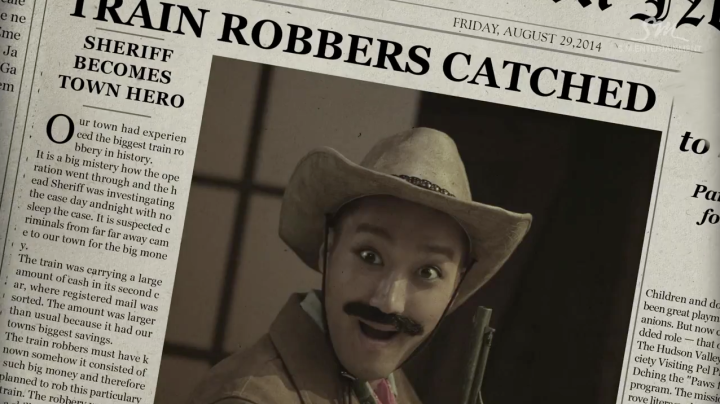 This English fail comes in the form of a newspaper. The first of it’s kind on or list, but definitely not the only one. Super Junior’s “Mamacita” MV featured a newspaper articles titled ‘Train Robbers Catched’ and as if that wasn’t enough incorrect grammar, it came with an article littered with odd sentences such as:

‘It is suspected criminals from far far away came to our town for the big money.’

Better Line: <I don’t want to write an entire newpaper article about a fictional train robbing, but at the very least I’ll correct the title> Train Robbers Caught

Lyrics: If I cannot touch the world [Korean] / If it cannot be shown even to me [Korean] / I really wanna touch myself [English]

This song has no doubt graced every Engrish list there ever was because of this super weird line. Two words. Just two literally little words. The sad part is Park Yoochun had pretty recently moved back to Korea from the US, and his English should have still been very much fresh in his mind.

Better Line: I really wanna touch it for myself  <Yes I’m aware this still sounds incredible odd, but at least it makes sense along side the Korea lyrics>

Lyrics: You shoot, shoot, shoot / I hoot, hoot, hoot <What does one say? Did he shoot you with a magic arrow that turned you into an owl?>

These are the kings of stringing together nonsensical English sentences

Lyrics: Still I have romantic in my heart <COME ON!!! 5 people are a phone call away!!! There’s just no excuse>

Better Line: I still have our romance in my heart / I’m still romantic at heart <Based on the Korean lyrics correction #1 would make the most sense>

Lyrics: Her whisper is the lucifer <It’s that pesky ‘the,’ no doubt the work of Google Translate.>

I promised another newspaper mishap, and here it is. The personally dubbed kings of bad English, SHINee, had a whole bunch of poorly executed English sentences in the make believe newspaper for their “Sherlock” MV, such as: Shinee jewelry found 3:00 am yesterday Louis had found them in the museum is a jewel.

That concludes this edition of ‘You Oughta Know..Better!’ But, if you’ve a good example of some bad English and underutilized English speakers, share them with us in the comments and you could see your recommendation in the next edition.