This week on ‘Who Wore It Better?’ we two fashion showdowns in Andy & Debb.

First up we have Jung Ryeo Won, Hwang Woo Seul Hye, Han Ji Min, and Park Eun Ji in this net skirt dress from the Andy & Debb Spring/Summer 2014 collection. We spotted Jung Ryeo Won in the dress for 1st Look, Vol. 64, Han Ji Min for the January 2014 issue of Elle magazine, and Park Eun Ji for In Style March 2014. All wearing the dress in white. Hwang Woo Seul Hye wore the dress in black for the March 2014 issue of Beauty+ magazine. 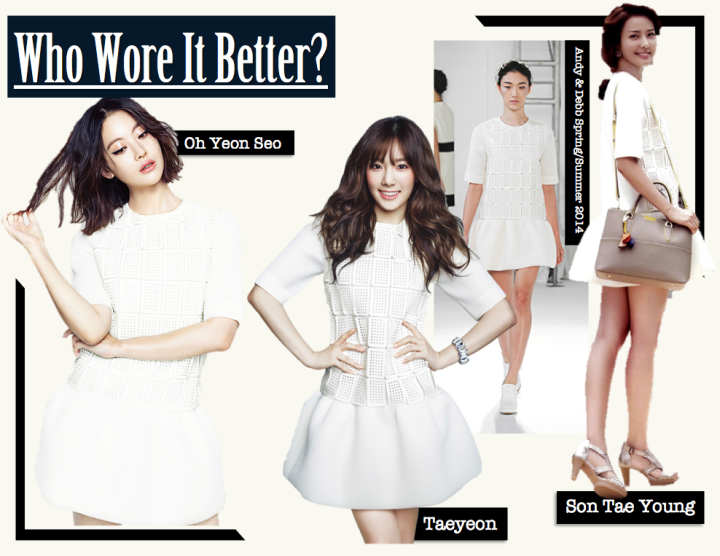 Our second fashion battle is between SNSD’s Taeyeon, and actresses Oh Yeon Seo and Son Tae Young. All three ladies wore this white mini dress from the Andy & Debb Spring/Summer 2014 collection. We spotted Taeyeon in the dress for Ceci January, 2014, Oh Yeon Seo for Sure July, 2014, and Son Tae Young for the April 2014 issue of Elle magazine.

Be sure to vote for your picks in the polls, and comment on each look below.