by Laqueta of K-Drama Central

Dating rumors are nothing new, especially if you’re a Kpop fan and many have to ask: What’s the big deal anyways? Why is dating in the K-entertainment world, especially for idols, such a scandal? Many of them are grown adults who are of dating age, some are even at that age where they can get married. Why does anyone care if someone in their twenties is actually dating? One word: Fans. Yes fans, those who buy their favorite artist’s albums, attend concerts, and buy merchandise. They are also a reason why idols often don’t make their relationships known to the public. Companies often market their artists as always being available especially to their fans, so this evolves into them being single and belonging only to their fans. So what happens when an idol begins dating someone their fans deem unworthy?

In October 2010, SM Entertainment and Namoo Actors confirmed SHINee’s Jonghyun and actress Shin Se Kyung were dating after pictures of them were released. Shin Se Kyung received tons of hate messages from upset Shawols that she shut down her Cyworld mini-homepage not long after the news was confirmed, coincidentally Jonghyun also lost fans with some fansites shutting down and random anti-sites popping up. Due to busy schedules, the two broke up not even a year later. Now this was just an example of fans acting cuckoo when their oppa gets into a relationship with someone that isn’t them or not near with who they’ve been shipping him with. We’ve all seen fans get upset over a simple dating scandal, but even just being afraid of losing fans still doesn’t make this a scandal. Sometimes fans just need a life. What about what the general public thinks? I guess you can say it depends on the idol and the person they’re rumored to be dating. If you lurk around some sites that translate Korean netizen comments into English you often run into the word “level”. For example: X isn’t on Y’s level and they can totally do better. What’s with this whole “level” thing anyways and why does (or should) this even matter with 2 consenting adults? 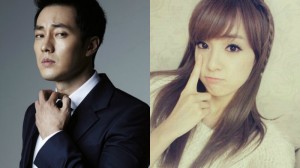 Last December, So Ji Sub and After School’s Jooyeon were rumored to be in a relationship and MBLAQ’s GO was supposedly the one to introduce them. Comments ranged from her being a pathetic idol to not being on his level then poor G.O got some hate for his alleged involvement. So Ji Sub was seen as desperate and the rumors were as ridiculous as those Won Bin and Sooyoung rumors, which would still seem more real since So Ji Sub and Jooyeon have actually met. So why isn’t Jooyeon on So Ji Sub’s ‘level’? Well he’s an actor and they’re considered to be so high on a pedestal that these idols shouldn’t even be

dating them. No one would care of Jooyeon dated, as long as it’s not someone who’s considered to be of a higher status than her i.e. any actor. What makes these status comment even more ridiculous is that So Ji Sub is known for hanging out with idols and has defended them when it comes to acting. He’s obviously grown (mid-30s) and she’s nearly 30 so what’s the issue? It won’t affect her career much, if at all, and he’s already established enough and is at that age to settle down. Granted he probably wouldn’t let those words affect him, but Jooyeon

doesn’t need to have people hate her for who she decides to date. But what happens when 2 popular idols date then breakup? Well then you have something that follows you for the rest of your career. Just ask B2ST’s Junhyung and Kara’s Hara.

The two idols confirmed their relationship in June of 2011 and lasted 2 years when their breakup was confirmed by their respective agencies earlier last year after months of speculation. What came after were questions about how they felt and especially for Hara, Junhyung’s name continuously attached to hers. Since she’s been in one public relationship, any type of rumors that come afterwards will forever mention her ex in the comments section. Hara’s young and so is Junghyun so why does anyone still care about whether they’re dating again? Both have remained friends and it’d be weird if neither of them decided to move on with their lives..and that includes relationship wise. Which brings me to why many decide not or don’t want to reveal their relationships: You’re forever linked to that person and for the girls, you’re known as so-and-so’s girlfriend.

This is the exact reason why Girls’ Generation’s Sooyoung denied the first rumors that popped up about her and actor Jung Kyung Ho. Well now she’s known as Jung Kyung Ho’s girlfriend even with her popularity and top idol status, but it wasn’t by choice. Same goes for fellow SNSD member Yoona, whose own relationship with actor/singer Lee Seung Gi was confirmed a day before Sooyoung’s. Both relationships pretty much receive support from all sides, even with Sooyoung dating an actor. Though the question about whether or not these scandals will affect their group’s popularity and the answer is a big fat NO since their latest comeback has earned them 7 music show 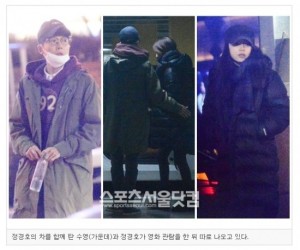 wins so far. People would have thought the entire fandom wouldn’t have been happy, but many have accepted the members are at that age to be dating…unless Taeyeon is revealed to be dating then that’s another story, but for the most part their fans are okay with them dating. However, what comes with public dating comes the constant questions that don’t seem to change no matter which program you go on. This is another way your name will forever be attached to your significant other or ex.

There’s nothing wrong with dating, it’s completely natural to do so. What isn’t natural is for fans to have the mentality like they own idols or they must keep it a secret because they’re afraid of losing their supporters. Just think about this: Would you like it if people you didn’t know thought they had an input into your relationship? Fans aren’t totally to blame since companies market them this way which opens the doors for fans to think this way. While some companies have a dating ban, many agencies don’t care and only ask their artists to be careful not to get caught. Sometimes I can understand a reason for not confirming a rumor since there may not be actual proof or it can possibly stall a career, but if there’s evidence such as videos and photos making it extremely obvious that these idols are together, it’s best not to deny it since no one would believe that anyways (a la Choiza and f(x)’s Sulli).