Written by Hallyu Tanya and The Zombie Mamma

Boyfriend made their U.S. debut last night at The Vic Theater in Chicago, performing before a loving and enthusiastic crowd of Bestfriends who welcomed this adorable six-member idol group from Seoul, South Korea, with open arms. 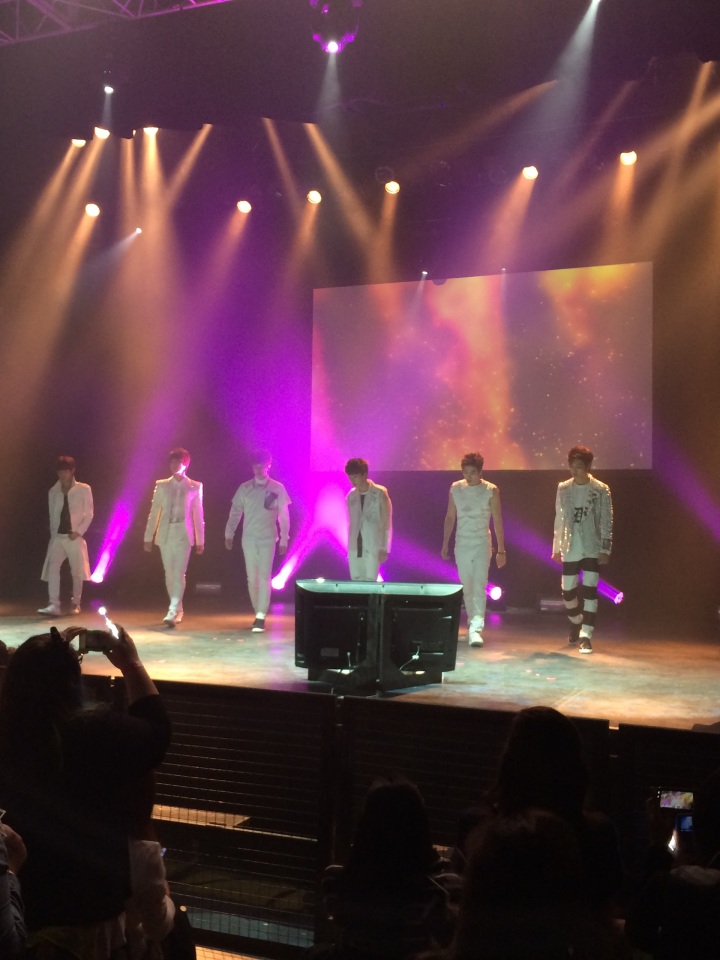 Kicking things off right at the first of two stops in Boyfriend’s First U.S. Showcase, organized by Jazzy Group, Boyfriend took the stage by storm with one of their most popular songs, “Janus,” much to the fan’s delight. It was adorably obvious the boys weren’t expecting to be met with such overwhelming love. The look on their faces when the crowd started singing along, right off the bat, was priceless. No doubt suffering from an over-abundance of nerves, Donghyun, Hyunseong, Jeongmin, Youngmin, Kwangmin and Minwoo seemed to let all of their nervous tension go as the the audience enthusiastically joined them in singing, “You’re not a bad girl…” and never looked back. 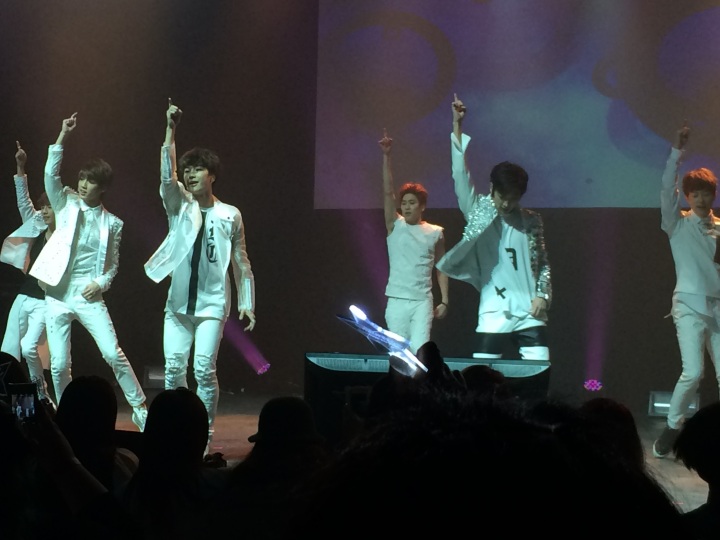 Moving from a three song set into a Q&A time, the audience was treated to a plethora of questions answered by various members of the band. When asked what they had dreamed of being before they decided on becoming singers, Youngmin revealed he’d always wanted to be a detective, “Like Sherlock.” Jeongmin admitted that “I Yah” was his favorite Boyfriend M/V because “…it’s so sexy.” Kwangmin revealed that he decided to become an Idol because his father loves music and he always wanted to be on stage since he was little, later proving he has skills beyond rapping, by wowing the crowd with a brief but impressive vocal solo. When asked to compare the differences between their American fans and their Korean fans, Boyfriend said that there was really only one big difference between the two, “The crazy hair colors!” Boyfriend went on to say that American fans are “Beautiful, cute and perfect.” Donghyun won the hearts of every girl in the audience when he answered the question, “What is your favorite accessory?” with, “All of my BESTFRIENDS!” and a smile. It was also revealed that Boyfriend is working on an album and we should see a comeback from the boys at some point this summer. 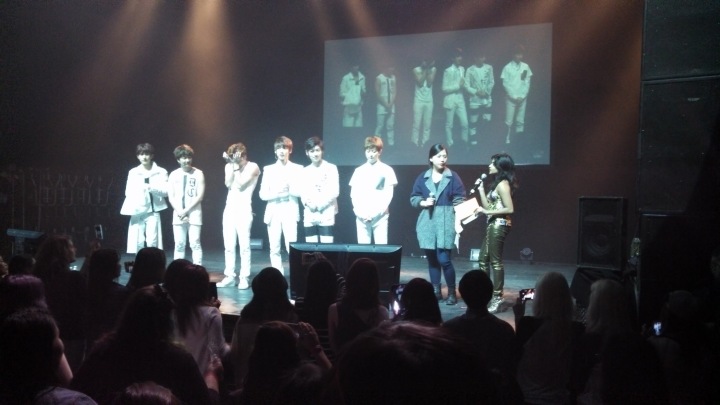 There was a special display of aegyo when Hyunseong was pressured into doing “Gwiyomi” by his fellow members. The Bestfriends in the audience ever sang the song to cheer Hyunseong on. At the end, he was so embarrassed that he hid his face until the other members pulled him back into the line and told him he did a great job. 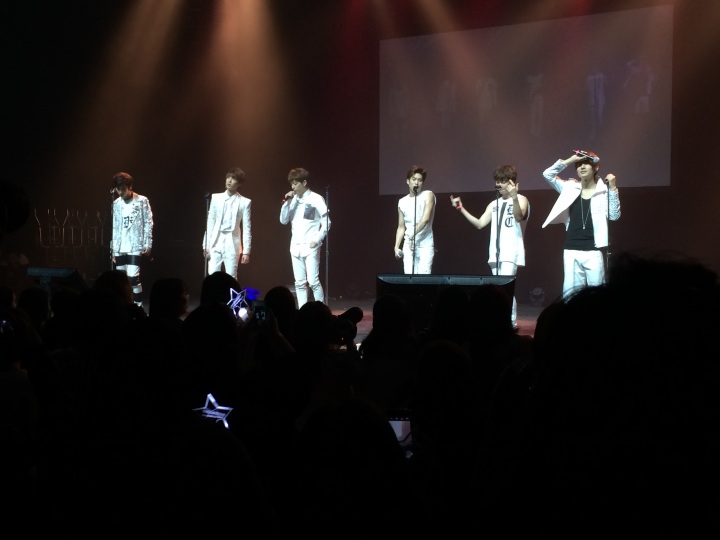 After Q&A the boys began a two-song set of music which included “Standing with U” and “Go Back” before treating fans to an adorable MV while the boys headed backstage to change. The end of the video ushered in the boys’ solo performances, starting with Youngmin’s beautiful ballad. Donghyun took the stage next singing “Listen,” wowing fans with his skills as a pianist, his singing and his ability to melt fangirls’ hearts. 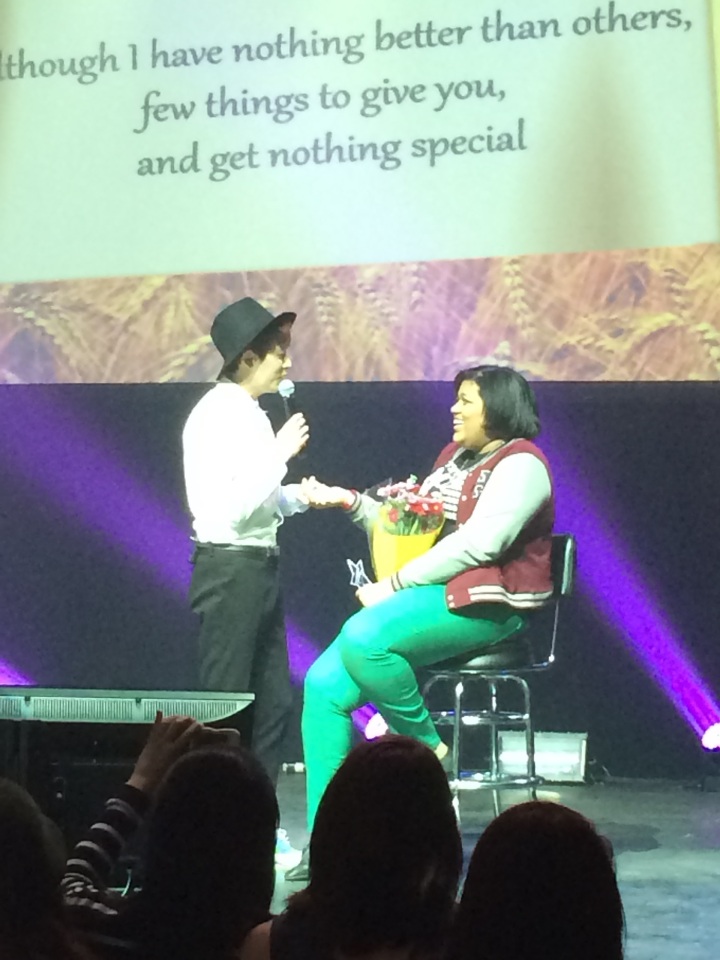 It was during Donghyun’s solo stage that one lucky audience member, Ryan Boyd, from Jamaica, New York, was brought on-stage to be wooed by him with a bouquet of flowers and a personal serenade, sung, for a bit at least, on one knee. If that weren’t enough to stop this poor girl’s heart, Donghyun continued his serenade with a whole lot of hugs and hand-holding that brought a brilliant and unending smile to this lucky girl’s face. Hyunseong was next to take the stage with his powerful rendition of Adam Lambert’s “Whataya Want From Me.” Jeongmin was up next, wowing the crowd at the keyboard with his rendition of Vanessa Carlton’s “A Thousand Miles.” To wrap up the solo showcases, Kwangmin, Youngmin and Minwoo took to the stage with an impressive dance performance. 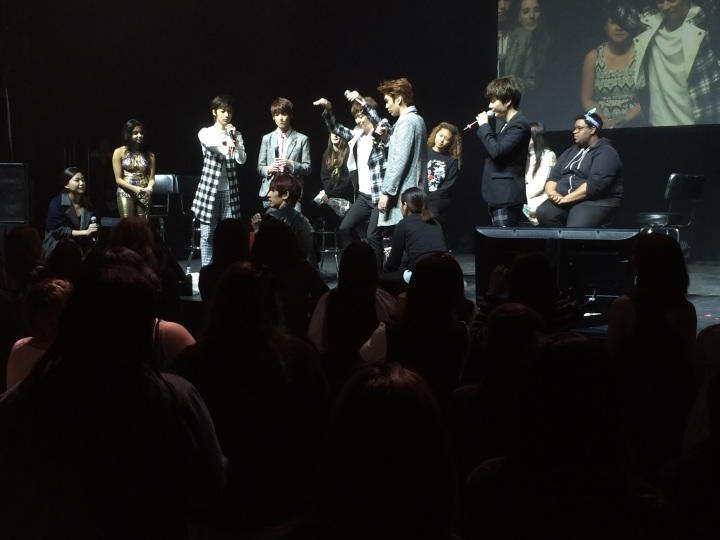 Jazzy Group surprised fans by allowing the boys to have game time with six lucky fans. Each member chose a seat number from a box and those 6 people were brought on-stage to play charades, with the boys acting out the movie/animal/object for their teammate. The fan in the seat that Donghyun chose was unable to make it to the stage, due to a physical disability, and he showed true concern for her by asking security to help her back to her seat before jumping off the stage to stand next to her in the audience. The game itself was hilarious! Minwoo and his Bestfriend won the game by guessing four actions correctly before the 60 seconds time-limit was up. 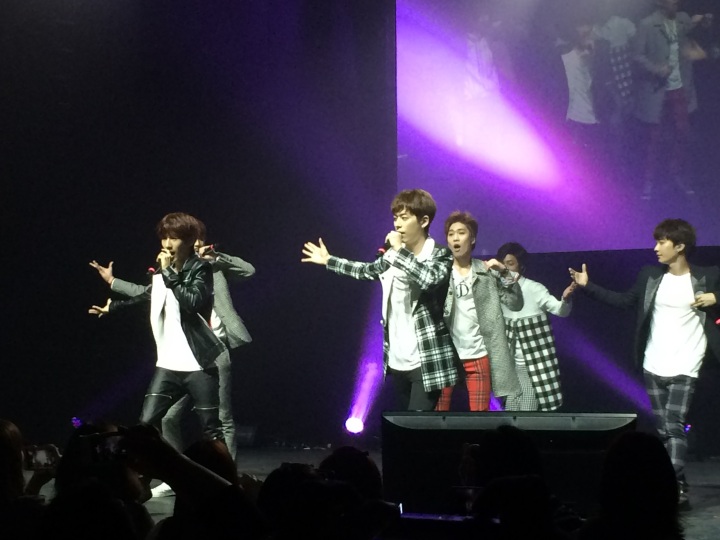 To close the show with a bang, Boyfriend took to the stage once more, delighting fans with what was undoubtedly the best performances of the evening, a no-holds-barred version of both “I Yah” and “Boyfriend” that left the crowd yearning for more. 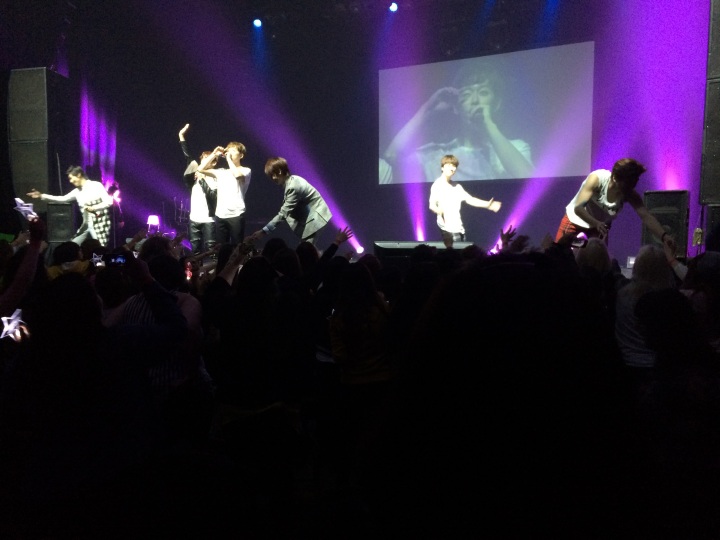 Leaving the stage to the wildly enthusiastic cheers of the crowd, the boys were back in less than two minutes, for an encore of “On & On,” which they actually performed TWICE. After the song ended the first time, Minwoo yelled, “Let’s go again!” and to crowd’s surprise, the sound techs restarted the song and the boys continued their aegyo-fest. To further delight fans, Youngmin left the stage and meandered his way along the edge of the crowd, a smile plastered on his face, stopping to pose for pictures and offer high-fives along the way. The rest of the boys stood at the edge of the stage, grabbing the cell phones that any Bestfriend offered and taking selcas of themselves, before handing them back to their lucky owners. Without a doubt, the encore was the best part of the evening as the boys stopped performing and just had fun with their Bestfriends. 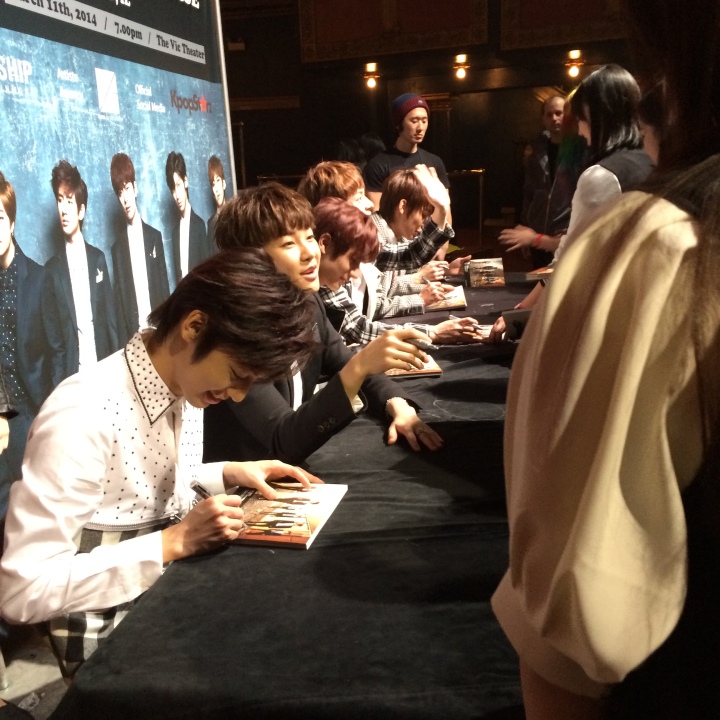 Following the concert, the 100 lucky VIP ticket holders that were given blue wristbands were given the chance to take a picture, ten at a time, with Boyfriend. Afterwards, the VVIP ticket holders were given their copy of Boyfriend The First Album Repackage ‘I Yah’ which were then signed by each member of the band, with a friendly high-five, flattering compliments/cute greetings, and ear-to-ear smiles. The professionalism of these boys after a long, tiring showcase was seriously impressive! They gave their all and Bestfriends from Chicago and beyond will never forget this once-in-a-lifetime experience.

Kamsahamnida and saranghaeyo, Boyfriend! We can’t wait for your comeback this summer and we hope you have more opportunities to visit the United States soon. Chicago misses you already!