T-ara, specifically their unit group N4, is certainly making headlines these days with recent news of a collabo, and love call from everyone’s favorite bad boy, Chris Brown. As I’m sure most people did, immediately upon hearing this story I had to question its authenticity. As all Kpop fans know by now, T-ara was involved in a HUGE bullying scandal last year that is still making ripple affects for the group today. Many fans, and non-fans, are still puzzled as to why the girls never made a statement about their public behavior, and why their agency, Core Contents Media, never had them take some sort of hiatus to ease the negative feelings towards the group. 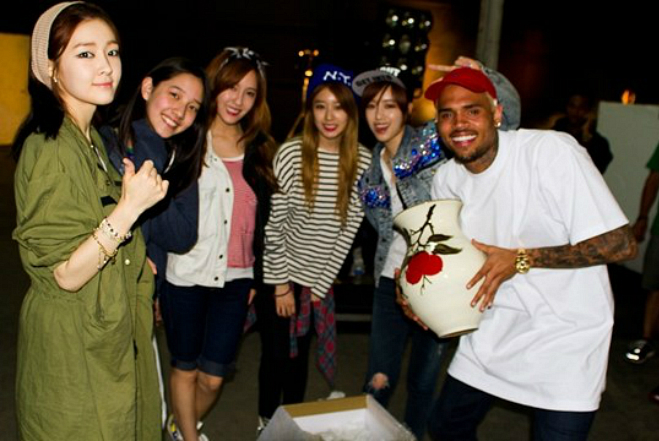 Now, a year later, out of the clear blue sky, CCM announces that T-ara’s first unit group, N4, received a love call from 24 year old Chris Brown thanks to soon-to-be member, 13 year old Dani, who supposedly knew Chris when she was in elementary school. There is an 11 year age difference between Dani, and Chris Brown I find it weird that she would have run into Chris Brown, and gotten to know him well enough in the last 9 years since his debut, that he would jump to do a music collabo with her.

Math aside, I have to wonder, was this collabo the best choice for T-ara? I mean Chris Brown is STILL working off that whole abuse scandal with Rihanna. If this is CCM’s way of getting T-ara back into the graces of Kpop fans, lets be honest, this is incredibly stupid damage control for a girl group who is trying to diminish bully rumors. Was there no one else, with a cleaner record that CCM could have gotten to made a ‘love call?’ Is Chris Brown trying to throw them a bone because he knows what its like to be public enemy #1? I think of Chris Brown as an incredible artists, and his music is always solid, and his style and T-ara’s style are on two different wavelengths. It all just seems too strange.

But, with ALL that put aside, the thing that really has me wondering if this collabo/love call is on the up and up is that I have yet to see Chris Brown tweet about or really reference T-ara or N4 in any form of social media. Generally speaking, that’s how love calls start in the Kpop world. We see artists/celebrities like Diplo, Will.I.Am, Snoop Dogg, or Teddy Riley, tweet about the artists they are a fan of, and then from there we hear about upcoming collabos, and so on. I saw none of that with N4.

I could have jumped up the minute this hit the news, and called out this….whatever you want to call it, but rather I waited for the full story, and all the information to come out, and my opinion still hasn’t changed. I think this ‘love call’ was the work of CCM to help boost public opinion, and I feel insulted. Its as if they thought, ‘let’s throw a big name in here, and all their anti-fans will put their foots in their mouths, and come rushing back to us.’

I never had a stake in T-ara’s controversy, so the whole thing kind of just blew over in my head, but when CCM continues to do this ridiculous media play I grow more and more tired of T-ara, and Core Contents Media.